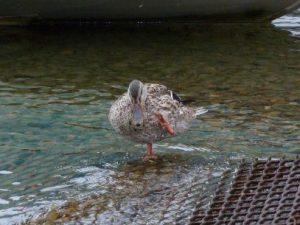 I grew up in the 1950’s in a very small town in Upstate New York. Everyone I knew was white, except for one black family, whose father was (as I recall) a lawyer. After I was grown and gone, a Chinese-American family appeared, but I never knew them.

There were a few Jewish families, and an even smaller number of Catholics, but in general it was a very WASP-y place.

Christmas was, of course, the high point of the year for kids, except for the Jewish kids. We felt sorry for them, really. Sixty years later, I recognize that they certainly felt left out, and perhaps somewhat alien and disrespected, but we didn’t understand that then. The concept of marginalization hadn’t yet appeared. Christmas was the norm, as was being white and Protestant.

My mother, who was a considerate and forward-looking soul, taught us two things about celebrating Christmas. First, we should not say “Merry Christmas” to the Jewish kids, but rather “Happy Holidays”, so as not to be offensive. Second, religious Christmas cards were vulgar and should be avoided, since not everyone believes the same thing. They were, in fact, “Catholic”, which was a 1950’s WASP synonym for vulgar. Our nascent multiculturalism was imperfect.

Public schools all had Christmas programs or pageants. Most of the plays were Christmas-themed but secular, but musical programs always included religious Christmas carols. Christmas decorations in commercial areas leaned heavily toward Santas, elves, and reindeer, but even department stores occasionally had Nativity scenes in windows or angels hovering over aisles. So far from there being a war on Christmas, it was more that Christmas was staging a war on everything else. We thought nothing of this, naturally; it was the norm.

A lot of the overt religious things are gone from our public Christmas season now, and we are well rid of them. The thoughtless assumption that everyone is Christian is beginning to disappear from our cultural norms as our culture has become more varied. And it should disappear, no matter how much the Neanderthal right wails about the (non-existent) war on Christmas. I’m even uncomfortable with the continued huge display of secular Christmas themes, though I recognize the commercial motives for this. I also think this may be slightly mitigated by increasing (but still minor) public attention to other traditions’ holidays, like Hanukkah and Diwali. Maybe recognizing major holidays in non-Christian traditions makes it OK to recognize major Christian holidays too. I’m not sure.

However that is, one thing that irks me every Christmas is the caterwauling about “the war on Christmas”. When I was a child, and well past that time, the religious holiday of one religion dominated our commercial and cultural discourse, and that can only be wrong. There is no “war on Christmas”; there is only a belated and still fractional recognition that Christianity is only one of half a dozen major world religions, and that America is not and never was intended to be a “Christian nation”.

3 thoughts on “Merry Happy Whatever”